How Blockchain Could Change the World Cryptocurrency, such as Bitcoin, Quark and others, has grabbed a lot of attention recently. I think that a lot of that is due to its apparent rise in value as speculation has taken hold. This enthusiasm for cryptocurrency from investors may be obscuring a more profound and long lasting phenomenon, the development of blockchain, the underlying technology that makes it possible.

Big Data, robotics and Artificial Intelligence are all expected to be huge drivers of change, but experts like Don Tapscott believe that blockchain offers the biggest opportunity for societal shift on a global scale.

In 1993, The New Yorker published a famous cartoon with two canines sitting around a PC, with the caption, “On the Internet, nobody knows you’re a dog”. Since the advent of the Internet, users have been asking the same question: How can we trust what happens online?

In 2008, a viable solution to this problem was offered in the form a paper released by an author operating under the pseudonym, Satoshi Nakamoto. The paper was called “Bitcoin: A Peer-to-Peer Electronic Cash System,” and it spelled out the details of a system that would allow for currency exchange without an intermediary. The underlying framework for Bitcoin would come to be known as “blockchain.”

How Does Blockchain Work?

Blockchain is a distributed database that maintains a list of records (called blocks) that contain the history of every block that came before it, up until the second it was edited — thereby forming a “chain” similar to a digital ledger. The entire operation is encrypted end-to-end, and every transaction is linked to a unique cryptographic signature that’s easily verifiable and virtually impossible to falsify.

This is because blockchain is constantly monitored by a global network of computers (nodes) that maintain and update the file in a lockstep fashion. In order for a file to be updated, data has to be fully synchronized — with total consensus — across the network.

What implications does Blockchain technology Have?

Although the possibilities of this technology are nowhere near fully recognized, Don Tapscott, CEO of Tapscott Group and Co-founder of the Blockchain Research Institute, lays out five key areas where Blockchain can likely have have a significant impact:.

According to Tapscott, 70% of the people in the word who own land possess only a tenuous title to it. This means landowners are susceptible manipulation by powerful interests who can undermine the validity of their ownership. This is a massive economic mobility problem for people around the world. Without a valid title for their land, people are unable borrow against it or plan for the future. If land titles could be put on a blockchain, these records would become immutable and unhackable — enhancing opportunity and security for billions.

Tapscott believes that companies like Uber and Airbnb don’t support the sharing economy as much as they claim. Rather, these businesses aggregate services and sell them. Instead of having billion-dollar corporations running these services, the responsibility could be put solely in the hands of users via the blockchain. If someone wants to rent a room or share a ride, the blockchain could handle the payment and reputation record — allowing increased profitability and cost savings for all parties.

Every year, workers send 600 billion dollars back to family members in native countries. Rather than losing money to an intermediary in the process, a blockchain application could be used to instantly send money without an intermediary. The entire transaction would take minutes instead of days and be much cheaper.

Enabling citizens to own and monetize their data

The most powerful asset of the digital age is data. And although we create this asset, it’s owned by corporations who record our digital trail of breadcrumbs and establish a virtual image of us. This virtual avatar is extremely valuable because, in many cases, it knows us better than we know ourselves. It is the culmination of all our online activity — what we say, what we buy, where we go and when. Today, companies are working with blockchain technology to set up a system where we can truly own, manage and monetize our own data so that we can take control of our privacy and protect our identities more effectively.

Ensuring compensation for creators of value

As soon as the Internet was created, the system of intellectual property was broken. Using the music industry as an example, record labels and streaming services get the lion’s share of profits from artists’ music today. Releasing music in a blockchain ecosystem, however, would allow the music to have a built-in smart contract that protects artists’ individual rights. Because the song itself is a payment system, all the money flows back to the artist. This allows the creators of the content to have control of their industry rather than an intermediary. Of course, this idea also has applications for things like art, inventions, scientific discoveries and journalism.

Nothing is more difficult to predict than the future. Some of these prognostications will likely come to pass, and other possibilities not yet imagined may be even more impactful. It appears that blockchain holds the most promise wherever existing institutions (whether governments or corporations) fail to efficiently maintain and secure vital information. The institutions themselves may indeed adopt blockchain for their internal processes to lower costs, increase security and data availability to those who own it.

For more info on cryptocurrency, check out this post. And make sure to subscribe to the Business Resource Center for more financial insights! 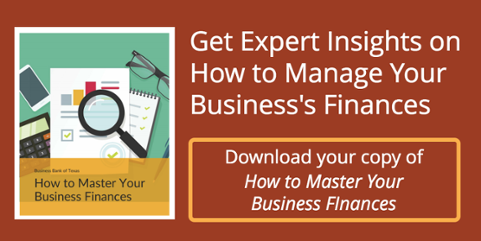 Dwayne Kolly brings a wealth of financial management and operations experience to Business Bank of Texas. Kolly has served community banks in south and central Texas for nearly 30 years, and is the bank’s CEO and Chief Financial Officer. He is a graduate of the Southwestern Graduate School of Banking at SMU (1993).
Read more articles from Dwayne Kolly